The Lord Elgin Hotel holds a special place in its heart for our fallen soldiers and its history is closely interwoven with that of our military. From our view overlooking the National War Memorial, we are reminded every day of the thousands of men and women who sacrificed their lives fighting for freedom and democracy during the First World War, the Second World War, the Korean Conflict, during peacekeeping missions and today in Afghanistan in the war on terror.

Each year since it’s opening, the hotel has hosted thousands of soldiers – those on active duty and veterans, as they come to Ottawa on military business, or to join with other’s to remember those we have lost fighting for our country. We have had the honor of hosting some of our most decorated soldiers year after year as they made their pilgrimages to Ottawa and then on to sites overseas where they fought major battles on behalf of Canada and her allies in years past.

For Veterans visiting Ottawa for the Remembrance Day ceremonies, you can take advantage of our special discount for Veterans here available November 8th through to the 11th.

LEADING UP TO NOVEMBER 11

The Royal Canadian Legion is presenting its annual virtual Poppy Drop on Parliament Hill from October 25 to November 11, 2019. Each evening from 6:30 p.m. to 9:30 p.m. (until midnight on Nov. 11), 117,000 falling poppies will be projected onto the iconic Peace Tower and Centre Block. There is one poppy for each of Canada’s fallen. “The Last Post” will be played on the Peace Tower bells by Dominion Carillonneur Dr. Andrea McCrady before the first Poppy falls on the first night.

Programming at the Canada Aviation and Space Museum

The Canada Aviation and Space Museum presents special Remembrance programming from November 2 to 11, 2019 (select dates). Attend a special military band concert, get a close-up look at rare authentic items, and take part in hands-on activities and tours perfect for kids.

Every year, the Royal Canadian Legion organizes the National Remembrance Day Ceremony at the National War Memorial in downtown Ottawa which runs from 9:00 a.m. to 12:00 p.m.

From 9:00 to 10:00 a.m., the Virtual Wall of Honour and Remembrance displays thousands of photographs of late veterans on large screens. At 10:30 a.m., a Veterans Parade departs from near Parliament Hill and makes its way to the National War Memorial, followed by the arrival of dignitaries such as the Prime Minister, the Governor General of Canada, and the Silver Cross Mother – a woman whose child has died while serving in the military. Additional programming includes the national anthem, two minutes of silence, a wreath-laying ceremony and a rousing fly-past (weather permitting). At the end of the National Ceremony and throughout the day, people remove poppies from their coats and place them on the Tomb of the Unknown Soldier. The tomb is covered in red poppies by the end of the day.

Thousands of people gather, rain or shine, to pay their respects to veterans during this very moving event. Crowds can hear the proceedings over loud speakers and have the option to watch a live feed on the jumbo screens. The event is also broadcast nationally on television and the Legion’s facebook page.

The Canadian War Museum, situated just west of downtown, is a living memorial to Canada’s proud military history. On November 11, Memorial Hall, located inside the Museum’s main entrance, becomes the centerpiece. On that day at exactly 11:00 a.m. a beam of sunlight shines through a single window into Memorial Hall to perfectly frame the headstone from the grave of Canada’s Unknown Soldier. To observe the beam of light at 11:00 a.m. from within Memorial Hall, tickets are available on a first-come, first-served basis as of 9:30 a.m. Other special events and interactive activities, such as Build Your own Monument (using clay), are also held on November 11.

As a complement to the virtual Poppy Drop display mentioned above, the National Arts Centre’s Kipnes Lantern will also display cascading poppies.

Just east of downtown Ottawa, a ceremony of Remembrance takes place at the National Military Cemetery from 10:30 a.m. to 12:00 p.m. on the grounds of Beechwood Cemetery. The ceremony honours all those who have fallen in the service of Canada and all Canadian Forces members interred at the cemetery. There is also a marching contingent including veterans, a band and a children’s choir performance.

You can also join free guided historical tours called “The Beechwood Stroll” on the fourth Sunday of each month at 1:00 p.m. See the Beechwood Cemetery’s event calendar for details.

Located next to the National Artillery Memorial, just east of Parliament Hill, the Lieutenant-Colonel John McCrae Statue honours the man behind the famous WWI poem In Flanders Fields. The sculpture done by Ruth Abernethy portrays McCrae on a broken tree branch, looking up just after he signs his name on what would become a very famous poem. The statue marks the hundredth anniversary of McCrae’s verses.

McCrae wrote the timeless lines to comfort himself after the burial of his close friend Lieutenant Alexis Helmer, a member of the Hull-based (now Gatineau, Québec) Zion Presbyterian Church who died at the Second Battle of Ypres on May 2, 1915. He was just 22-years-old.

There is also a program called Operation Veteran, which ensures that veterans eat for free at the Canadian War Museum every day the Museum is open. Every year, the program also invites students from across Canada to attend the Remembrance Day wreath-laying ceremony at the National War Memorial and a special tour of the War Museum, where students have the opportunity to talk to veterans.

Share your special Remembrance Day moments in Ottawa with #RemembranceDay and #MyOttawa. 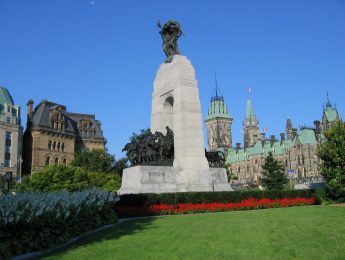 The National War Memorial, also known as “The Response,” is a cenotaph symbolizing the sacrifice of all Canadian Armed Forces personnel who have served Canada in time of war in the cause of peace and freedom–past, present and future. The memorial is the site of the national Remembrance Day Ceremony on November 11.

The National War Memorial was first unveiled in 1939 to commemorate the response of Canadians in the First World War 1914-1918. Over the years, the memorial has come to symbolize the sacrifice of all Canadians who have served Canada in time of war and was rededicated to their honour.

In 1918 the armistice that ended World War I came into force, bringing to an end four years of hostilities that saw 60,000 Canadians die at sea, in the air, and on foreign soil. The war to end all wars ended on the 11th hour of the 11th day of the 11th month. On that day each year, Canadians are asked to pause and remember the thousands of men and women who sacrificed their lives fighting for freedom and democracy.

In Flanders fields the poppies blow
Between the crosses, row on row,
That mark our place; and in the sky
The larks, still bravely singing, fly
Scarce heard amid the guns below.

We are the dead. Short days ago
We lived, felt dawn, saw sunset glow,
Loved, and were loved, and now we lie
In Flanders fields.

Take up our quarrel with the foe:
To you from failing hands we throw
The torch; be yours to hold it high.
If ye break faith with us who die
We shall not sleep, though poppies grow
In Flanders fields.