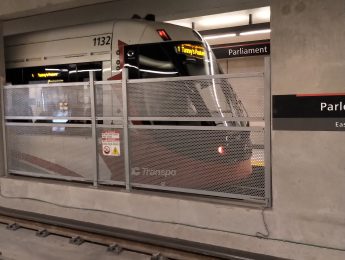 Well, it has finally arrived!  The long-awaited Ottawa light rail train officially launched on September 14th and this morning was it’s first run on a busy business day.  It has been years in the making… long overdue and anticipated!

Today, the General Manager of the Lord Elgin Hotel in downtown Ottawa decided to take a ride.  He boarded the train at Parliament Station by walking up two blocks from the hotel here on Elgin Street.  From there he took the train to Blair Road (east end of town) in under 15 minutes.  Then he returned to downtown Ottawa and then continued to Tunney’s Pasture in less than 10 minutes.  He was VERY impressed, by the speed and frequency of the trains (every 4 to 5 minutes or so).  What a game changer!!

We are thrilled that our hotel guests at the Lord Elgin can now get out to their meetings or offices where they are doing business in the East and West end AND all places in between so easily and quickly.  Not only will they be there in a flash, but they will be warm and dry…. yahoo!!!  Something we will all love come winter, especially in downtown Ottawa.

The big bonus of all this is that the downtown traffic around the Lord Elgin Hotel and nearby will be greatly reduced, as the many buses along Slater street and Albert street will be cancelled or their schedules reduced significantly.  Our valet team will be so happy to be able to get in and out of garage in a couple of minutes!

Thank you to all of the thousands upon thousands of workers who have made Ottawa’s new LRT possible !  We are eternally grateful!!

From the entire team at the Lord Elgin Hotel in downtown Ottawa!!