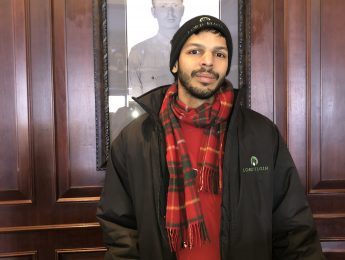 “The most meaningful event was actually getting the job here, it really turned my eyes around when I was 22. Got the gig and managed to sort of be able to stand on my own two feet. It gave me the independence for the first time in my life that, I was able to distance myself from any sort of support system that was already in existence.”

“I like that it is an honest job, I like that I am directly working and dealing with people. The work that I do – there are no questions around it.   I went to school for business and am currently studying economics. I also did physics and math beforehand and obviously the job is very flexible for school. That being said, I have been in school pretty much the whole time I have been here.”

“But it is not easy to find work where what you do is directly helping people. And I had briefly a job for a mortgage company; and in doing that kind of work, it made me see the difference in the work I do here at the hotel.”

“In terms of a guest impacting my life, I would have to tell you about a heart surgeon that stayed here.  He did a twelve-hour surgery on a boy, and I did not know this when I first met him. He came up to me and was trying to register for parking. He began writing everything I was saying down, I just thought that there was this small man, being so meticulous and/or forgetful. He just kept writing everything I was saying about how the parking system worked. I got a little frustrated saying that, all the instructions are on the paper below. Then, two hours later he comes down in this suit, and was being greeted by officials and such. I was told after he had done this twelve-hour surgery that was very difficult to save the boy’s life. Realizing that was why he was so meticulous, I felt bad and that was a life lesson to me. Never to judge a book by the cover.”